Woking & Sam Beare Hospices announced last night [Tuesday 16 May], at a special reception at the House of Lords, that its interim CEO and Director of Nursing, Jayne Cooper, has been successful in being appointed as the new permanent CEO of the Surrey based hospice.

This announcement comes ahead of the patient-centred charity moving into its new state-of-the-art hospice in Goldsworth Park Centre, Woking. The prestigious event last night, hosted by Lord Liverpool, was to celebrate the opening of the hospice’s new facility and to thank those who have generously supported the development of the new build. It therefore seemed a well-timed opportunity following the conclusion of the CEO recruitment process to make this announcement.

Marc Riggs, Chair of the Board of Trustees for Woking & Sam Beare Hospices and who broke the news, comments:

“Recruiter Veredus conducted a thorough search on our behalf and a wide range of suitable candidates were considered. Following the completion of this process I am delighted to announce that the best candidate for the job has accepted the role on a permanent basis, and Jayne Cooper is now confirmed as CEO of Woking & Sam Beare Hospices.”

“With the imminent opening of our cutting edge facility, the Board of Trustees and I are confident that the future of hospice care across Surrey is now in extremely capable hands, and there are many exciting opportunities ahead.”

Jayne Cooper has been interim CEO as well as Director of Nursing for just over seven months. Under her leadership the charity is due to open its brand new hospice to its first patients by the end of May. 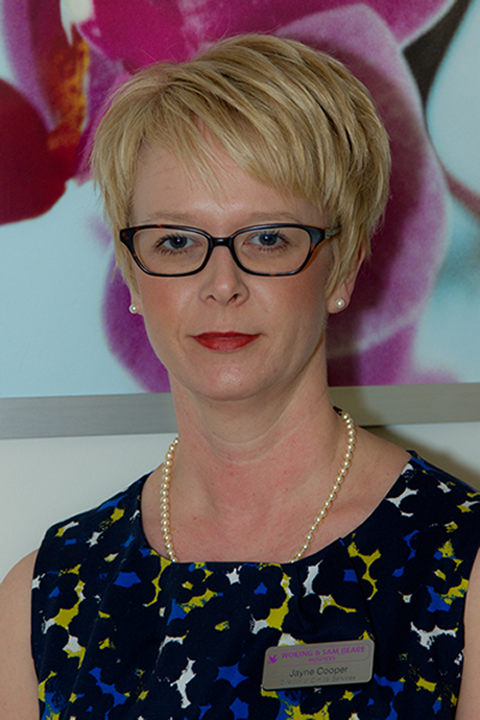 “I am thrilled to be leading Woking & Sam Beare Hospices with such a wonderful new facility. This is a fabulous organisation, with an amazing team of staff and volunteers. I could not be more proud of them and all we have achieved. Going forward it is now possible to put Surrey on the map for leading the way in specialist palliative care.”

The hospice, which covers the whole of North West Surrey, and each year delivers specialist palliative care to over 1,400 patients and their families, will now be starting its search to fill the Director of Nursing post, which Jayne had been covering while interim CEO. Any applicants interested in this post should contact the hospice’s Human Resources Department at recruitment@wsbhospices.co.uk or please visit the charity website at www.wsbhospices.couk.